This was our second year back in Yuma and this year was even better because my nephew’s family lives there now and we driveway surfed for a week.  The next week our friends Chyerl and Jesse joined us  camping in the desert off Sidewinder Road about 14 miles west of Yuma (which is actually in California).  I was surprised by the way I felt when I saw the “Welcome to California” sign.  I felt really happy to be back in the state I’ve called home since 1979.

We parked in Kevin and Mariya’s driveway where they an an RV spot. I still don’t know how Ralph backed our 33 foot Motorhome in the spot. As you can see from the photo below, it was a very tight spot, so tight in fact that we couldn’t get the door open all the way and had to squeeze through it for the week we were parked there.

We took advantage of Kevin, Kevin’s tools and the many RV stores in the Yuma area to complete a long fix-it list. Ralph installed a new toilet, kitchen faucet, water pump, check the slides, light fixture above the kitchen sink, valve extender on a tire, and hinge under the bed. I also purchased new curtains for the front of the rig. Yuma is an RVer’s dream. There must be 50 RV parks filled with mostly Canadian’s (seasonal) and many RV stores and dealers. Yuma also has three “swap meet” type marketplaces for you to spend your money in. We bought a sun screen to hang from our awning to block the sun and a roll up table to use when there is no table at the campsite. Both things we’ve wanted to buy for a while and they had very good prices at the swap meet.

We had such a good time with the desert Furtah’ s. Mason, my grandnephew, is almost four years old and was so much fun to spend time with. He warmed up to us pretty quickly and had Ralph playing with him and his toys in no time! After we moved to the boondocking site on Sidewinder, they came out to visit us twice. 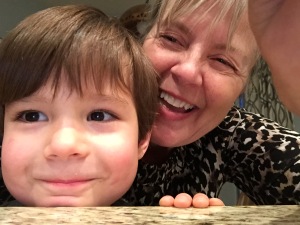 We all went across the border into Los Algodones, Mexico for the day. Ralph was our tour guide because he has been there a couple times before. Mariya wants to get some dental work done at the same dentist that Ralph had dental work done. The seven of us (including Chyerl and Jesse) walked across the border and the four blocks to the dental office. Mariya met the dental staff and checked out the office and made an appointment for a full consultation in March. We then went to a great restaurant for lunch and drinks. For seven lunches, four beers, one margarita and a couple of soft drinks the bill was $44.00. We purchased several things from the vendors that like the sidewalks and then walked back across the border. There wasn’t even a line at the border crossing. We all had a fun time and I think the desert Furtah’ s will be returning in the future. 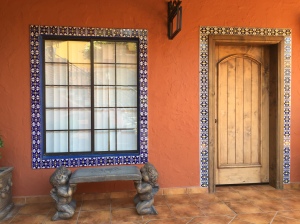 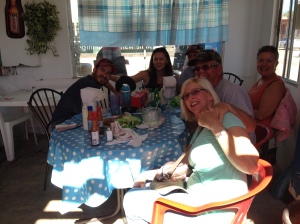 A day in Mexico…great lunch

Chyerl, Jesse, Ralph and I went Geocaching one day and found eight geocaches.  They were all located along Sidewinder Road and pretty easy to find.  We had a long walk and came across this marked grave. 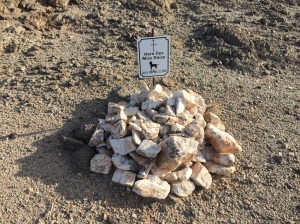 RIP in the desert

Looking for a geocache 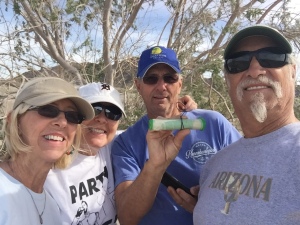 We found it…actually eight of them!

The next day Kevin, Mariya and Mason came out to our campsite with the s’mores fixings and we had a campfire. Little Mason really enjoyed himself out in the “wild”. Jesse got out his drone and flew around the area video taping.  When I get a copy I will post it here.

Drone flying over the desert

Desert Furtah’s at the campfire

I never tire of the beautiful desert sunsets.  I was very sad to leave Yuma and the “kids” and look forward to my next time in Yuma. 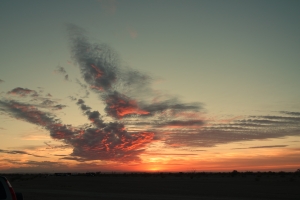 From Yuma we caravanned with Chyerl and Jesse up to Lake Havasu City and stayed in the back lot of Prospector’s RV, the same place we stayed last year. We took advantage of their pool and showers and had a pleasant three day stay. We took Cheryl and Jesse to the Desert Bar. They couldn’t believe we took the Mini Cooper up the Desert Bar road last year. This year we had the Honda CRV and it was just as bumpy! We also went to an old car show at SARA park speedway. Also we had to make a stop at the London Bridge.

We started the last part of our trip back to California and the next stop: Death Valley!